In a new edition to the blog we will be sharing stories from around the world from our friends and fishing travel specialists: Where Wise Men Fish. If you’re interested in booking an ultimate destination fly trip these are the folks to talk to!

The Grimsa sources much of its water from Lake Reyðarvatn. This acts as a large reservoir that not only helps regulate the flow of water into the Grimsa, but critically ensures that in low-water conditions, the river maintains a respectable flow of water. Consequently, come high or low-water it is one of the most consistent rivers in Iceland and it would be fair to say that this gave our group a chance for some good fishing that we may not have enjoyed otherwise. The Grimsa enjoys one of the earliest runs of Salmon in Iceland and although the river had only opened a week earlier, the success of the opening group showed what was possible, with the salmon already spread out along the length of the river.

The forecast immediately preceding our arrival showed cloudy skies and some heavy rain. Tragically, much of the rain that fell prior to our arrival was in the coastal areas which did little to boost the height of the river. Regardless, some streams that we passed on the 1hr 45 min drive from Keflavik international airport at least showed a distinct white ribbon of water cascading down them, which had not been apparent over the last month or indeed 12 hrs earlier. By the time we arrived at Grimsa lodge, in time for the evening fishing session at 4pm, the sun was back in full force. The unwary deployed in shirt-sleeves, the cannier with a fishing jacket stowed in the car. The skies darkened, the clouds broke and on our first evening we were treated to the first significant rainfall in a month.

The following morning the river had risen, not a huge amount, but enough to get things moving. We also moved; fishing 2 beats every AM and PM session, which meant that we fished all the beats on the river each day, as opposed to just half. Being early in the season, and without the full weight of fish in the pools this seemed like a prudent strategy, fishing what would be considered the most productive pools more frequently, although at the expense of a degree of variety, as we tended to skip some of the ‘non-producing’ pools. When you are not catching, there is always a tendency to challenge the system, whether it be because you think certain pools are being ‘thrashed’ or ‘foamed’, as I once comically heard a pool described after an individual’s rather energetic casting!!

I have often heard people saying that if a fresh fish is in the pool it will take a fly…any fly! From my experience I have to say that I categorically refute that, although this discussion is best done when suitably animated with a bottle of single malt to assist! Equally I also say this outside of any conflicting interests as a wholesale provider of Atlantic Salmon Flies – Shadow Flies!! In Iceland, when leaden skies do not prevail, it is very frequently possible to spot the salmon. Add some technology, armed with a drone, and you can then get a bird’s eye view into most pools, irrespective of the surrounding topography! This provides a fascinating insight into what happens when you cast a fly over a salmon. Frequently the salmon will simply ignore it, however on others, salmon will move to the fly, avoid the fly and of course thankfully, from time to time, take the fly! Different flies create different reactions. If you are a doubting Thomas and do not believe it, then come to Iceland and watch what can be an incredible visual spectacle.

All of the above is to say that having fished down a pool once, without a take, then try something different. Fish the pool 4 times with different flies in different sizes at different depths. Even then, as happened all too frequently over our trip, as a pair vacated a pool, and another followed up to fish it later, that same pool which may even have been ‘foamed’ and appeared devoid of fish, would yield a fish for the group that followed. Possibly, possibly, the fish had just moved in, but far more likely, it came down to being in the right place, at the right time, with the right technique!

We fished classically small Icelandic flies using size 14-18 trebles, stripped very large sunrays with a wing length of up to 8cm, trotted nymphs, fished regular flies and of course used the hitch.  This was done on a range of floating, intermediate and sinking lines. I think most interesting of all was that success, although it did sometimes happen on the first run down a pool, more frequently happened having deployed an arsenal of techniques before!  This is not fickle but rather it is the essence of salmon fishing where anglers need to find the key to unlock success.   Given knowledge that a fish held a potentially taking fish then spending an hour or more trying to find something that works is equally as rewarding as hitting a pool where every cast seems to catch a fish  It is of course why Atlantic Salmon are revered by anglers the world over!

On any new river, three days of fishing is barely enough to dip your toe in the water in terms of understanding the polls, let alone for those new to Icelandic salmon fishing, getting to grips with the myriad of different techniques that might and can be used. The presence of a guide is always invaluable. To take the famous and reputedly most productive pool on the Grimsa as an example. The bulk of the salmon caught below the Foss (waterfall) immediately in front of the lodge, were lying less than a few feet from the ledge where one stands, immediately ‘under’ the fall. Without good knowledge, which a guide can impart, and the confidence to believe that there are fish holding in that area, the tendency would be to cover the spot with a few casts and then move on to barren water. If you are used to fishing larger salmon rivers, where covering the full length of a pool is more important than working a specific area, this style of fishing can be disconcerting! This specific pool on the Grimsa does benefit from a high cliff. On a sunny day individual fish can be spotted and counted. Success and confidence tends to build more success, and that to an extent is often born out in individual catch results.

Grimsa lodge is an architectural spectacular, and in its capacity as a fishing lodge, it probably stands alone in its originality and design. Love the look, hate the look, question the look, it is undeniably striking. Built in the 1970’s and designed by Ernest Schwiebert, a notable architect from the USA, who loved the river with a passion, it was certainly a gift to the great many anglers who have enjoyed it ever since. It has a prodigious amount of rooms, and even when anglers are rod-sharing, it can almost allow everyone to have an individual bedroom, a luxury and a pleasure, even if not an absolute necessity. The food served at the lodge was as good as any food I have experienced at a fishing lodge; the new young chef who arrived this season was outstanding!

Success is relative! Had all around us being catching twice as many salmon, maybe the feeling would have been that we picked the wrong week or the wrong river. 19 salmon and 5 Sea Trout might be considered disappointing for 8 rods over 3 days fishing on the Grimsa for this period. Had we hit the numbers on the 5yr average we might have expected double that amount! BUT conditions were far from average and others around us were definitely not catching double or even the same amount. Everybody in our group had their fair share of action, even if some rods had more to the bank than others. What was a real bonus was the number of good-sized salmon. Relatively few and far between were the 3-6lb fish but rather of those caught we enjoyed approx. 50% in the 7-20lb category. On light rods, fighting fresh run salmon and in the wake of last summer’s strangling drought over most of the Northern hemisphere, this was a trip to rejoice in one’s good fortune! 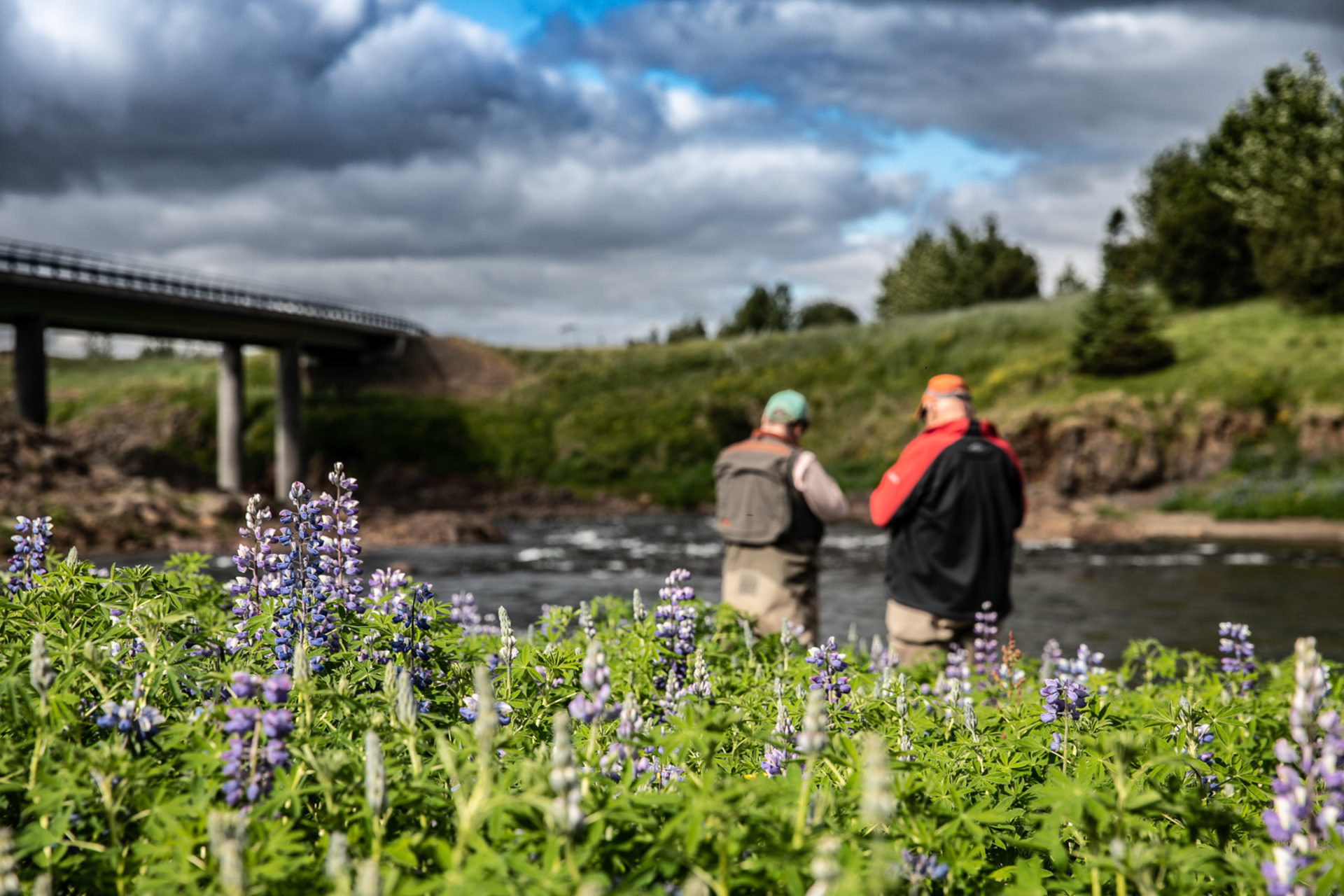 Marty is the Content Director of Recur Outdoors. When he’s not on the water you can usually find him tracking down a good BBQ joint or up-and-coming brewery.